I followed my talented friend Doris to Italy for a watercolor workshop week at a unique place near Siena called Tenuta di Spannocchia. This tenuta (estate) is named after the Spannocchi, one of Siena's powerful banking families who were residents here as early as the 1200s. The Spannocchi family owned the estate until the 1920s, when it was sold to an Italian count named Delfino Cinelli. Spannocchia is still owned by Delfino's descendants. The Cinellis operate Spannocchia as a Foundation, and membership in the Foundation is required for anyone who wishes to stay in its guest accommodations. 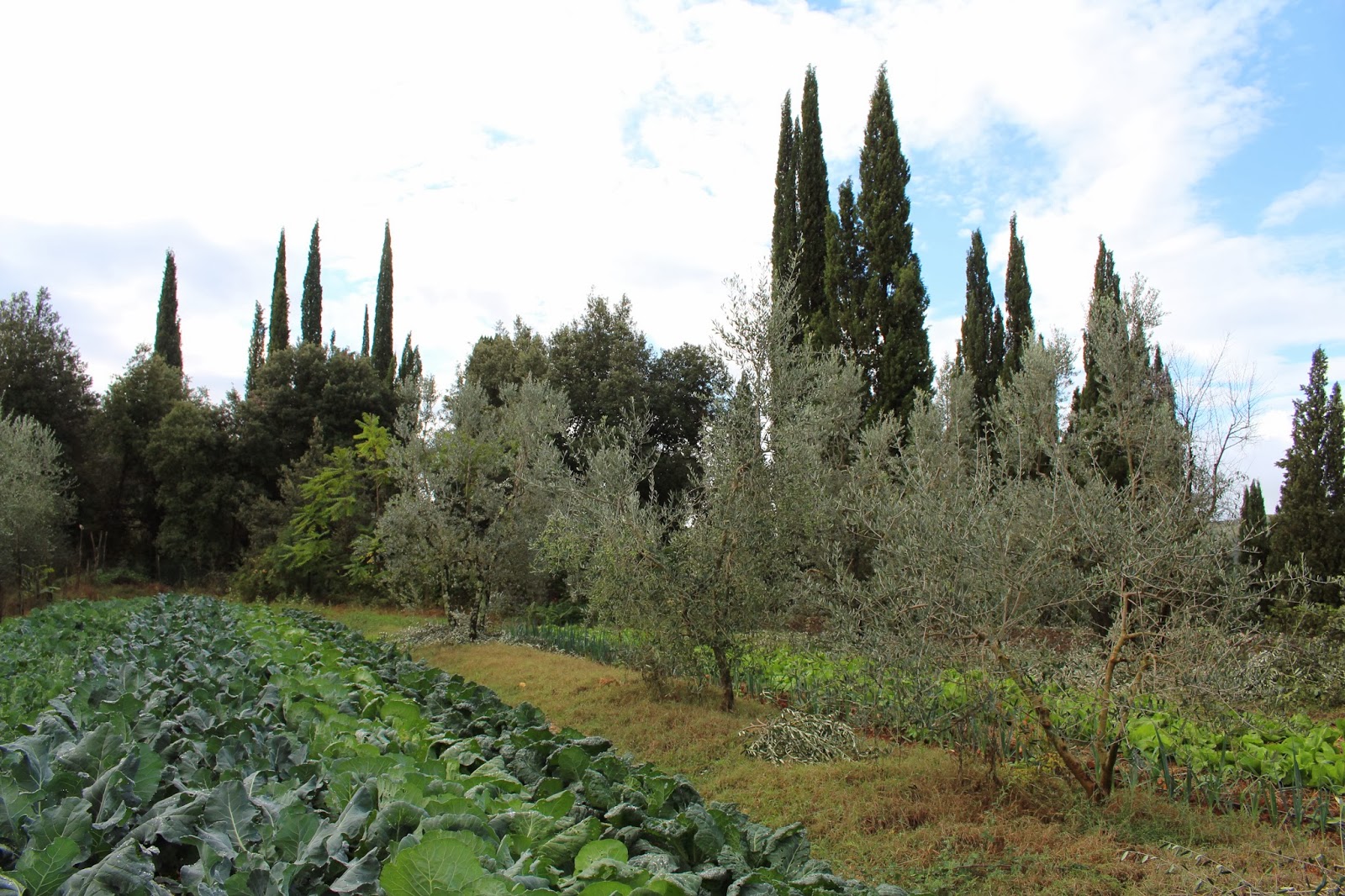 This is a serious working farm, and as guests there we felt like part of the tenuta's family. The estate's staff (and the young interns who come to Spannocchia for 3-month work/study stints) work tirelessly to keep it all running smoothly. They grow most of the food served to guests and staff right here on the property. Spannocchia's olive oil, wine, and salumi products (cured meats) are also sold at local farm markets.


In 1994 Spannocchia began an animal breeding program that works to increase populations of endangered domestic breeds such as Italy's Cinta Senese pig. Our group had a great tour of Spannocchia's Cinta Senese operation. The highlight of the tour was visiting an enormous sow and the 14 cute little piglets that she'd just given birth to. 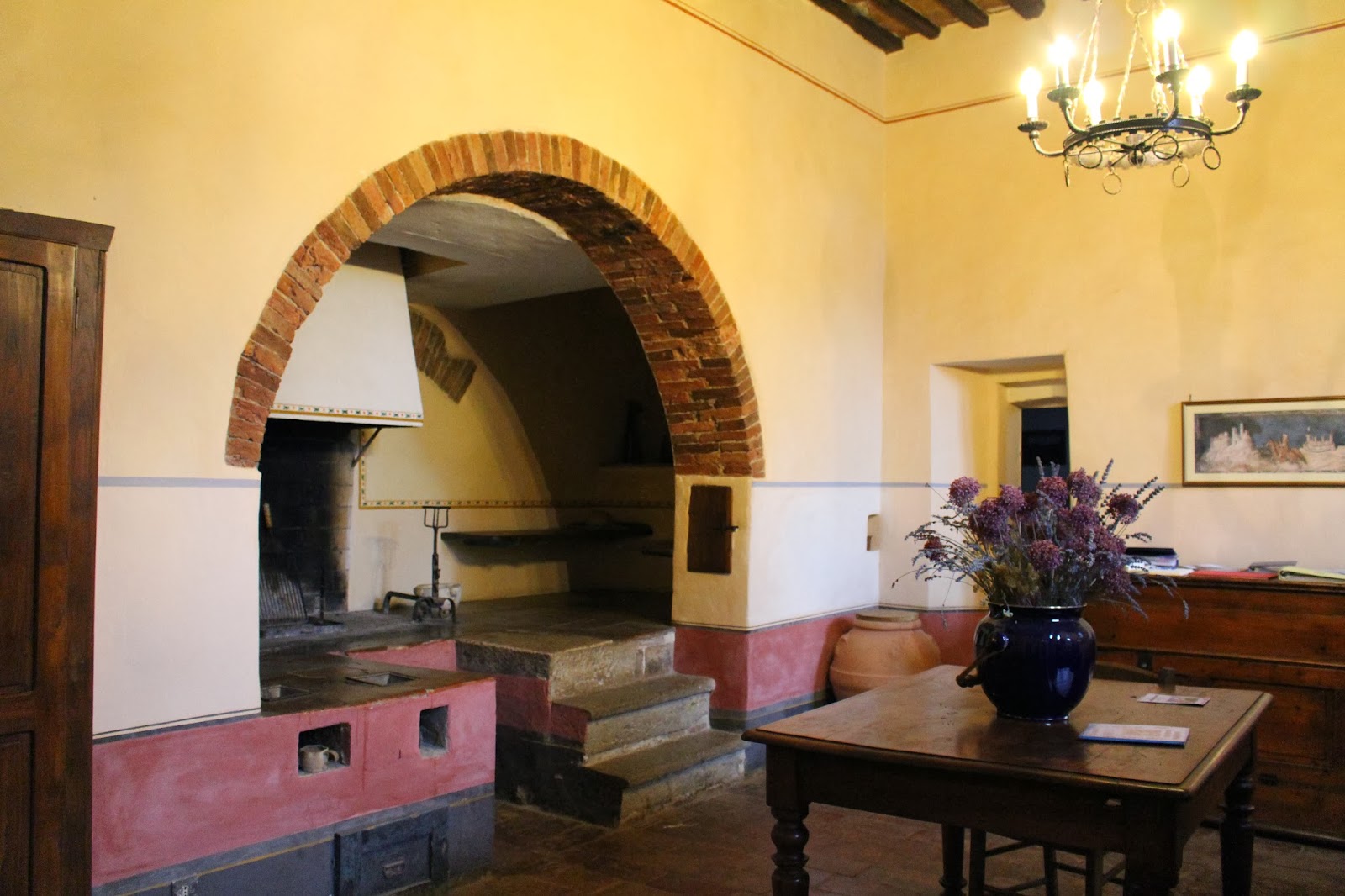 Spannocchia's rooms are comfortable, with an eclectic mix of furnishings. Old family portraits and mementos are in the common rooms and hallways. The castello's original 18th & 19th century decor has been preserved (and restored when necessary). The simplicity of the rooms added to Spannocchia's charm.


My room, with its private bathroom, was in the central section of the castello. Oh, what a bathroom! The wooden-seated commode (much too posh to be called a toilet) is without a doubt 100+ years old. Its water tank is attached to the wall high above the bowl, with a chain barely within reach. The beautiful matching sink had a skinny brass spigot that dispensed only cold water. My shower had no base, just the tiled floor of the bathroom with a drain. Shower curtains pulled around to prevent the spray from soaking the rest of the room. 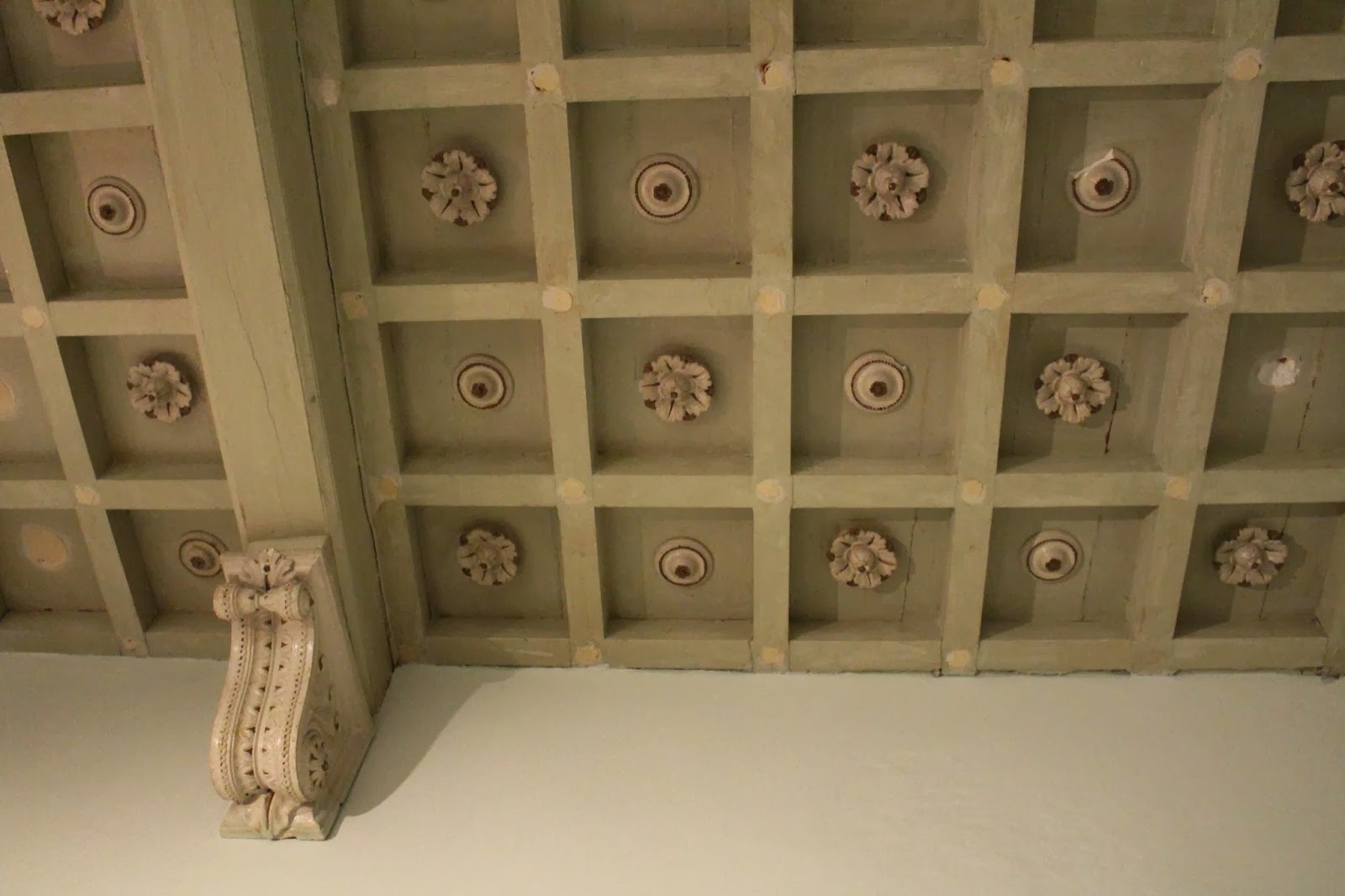 There was a HUGE wardrobe in my room, two very tall wooden beds, and a most unusual pale green coffered ceiling, probably vintage 18th century. 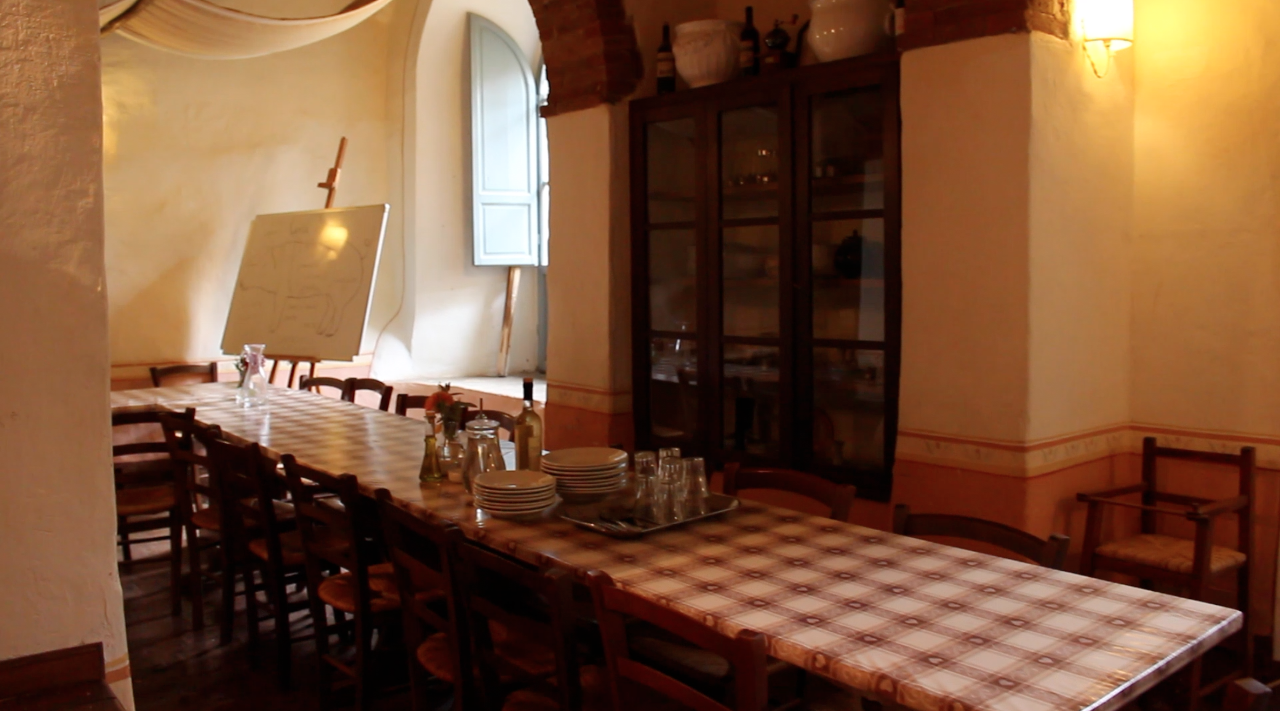 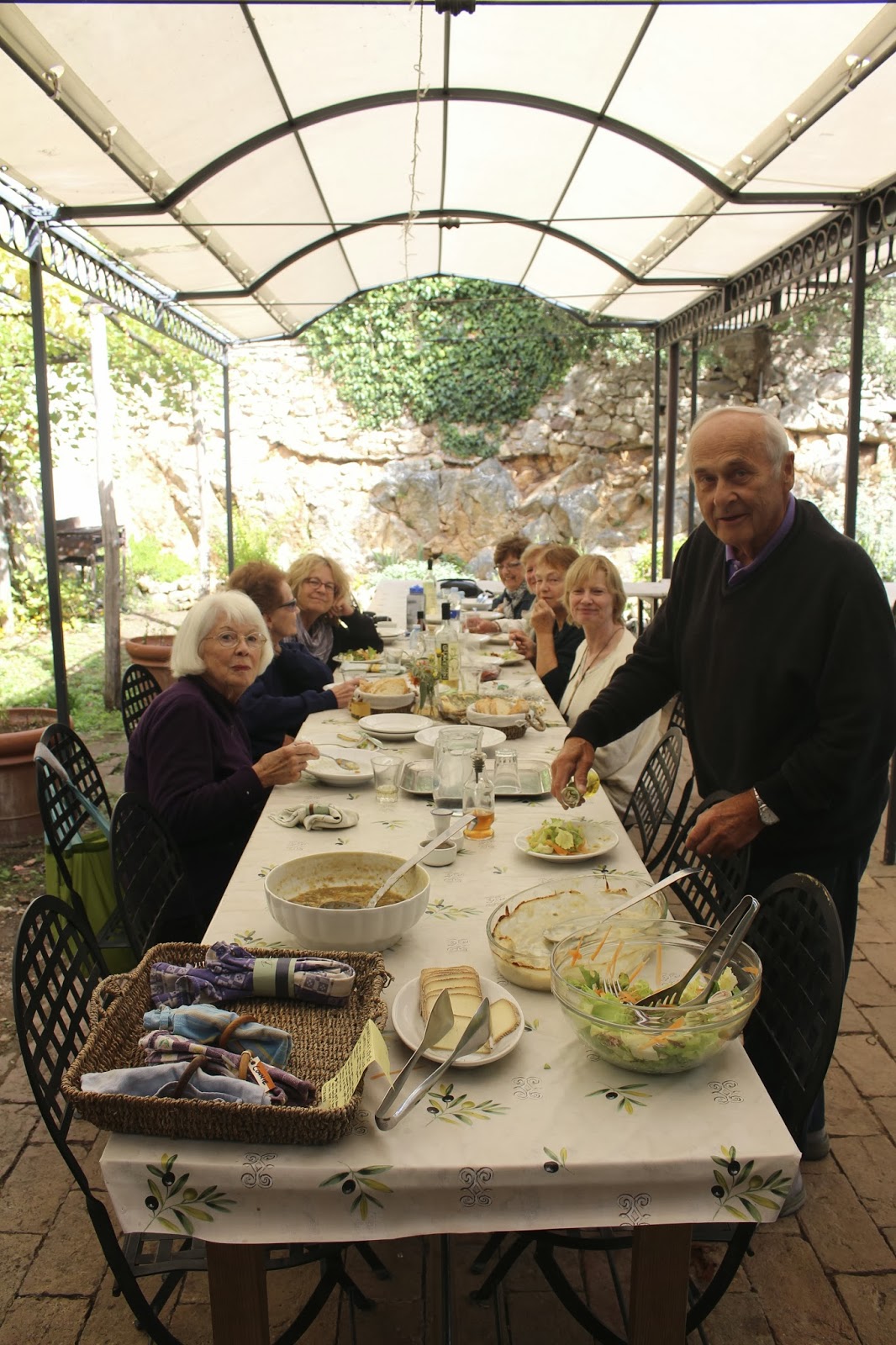 Breakfast, lunch and dinner were served family style on long wooden tables in a room in the castello, or on a pleasant outdoor patio if the weather was nice.

Meals were very good, simple recipes prepared by cheerful Italian ladies whose voices and laughter came drifting up from the kitchen each morning. Spannochia's delicious estate bottled wine was served at lunch and dinner. We ate together with other guests and the interns. By the end of the week we'd made some new friends. 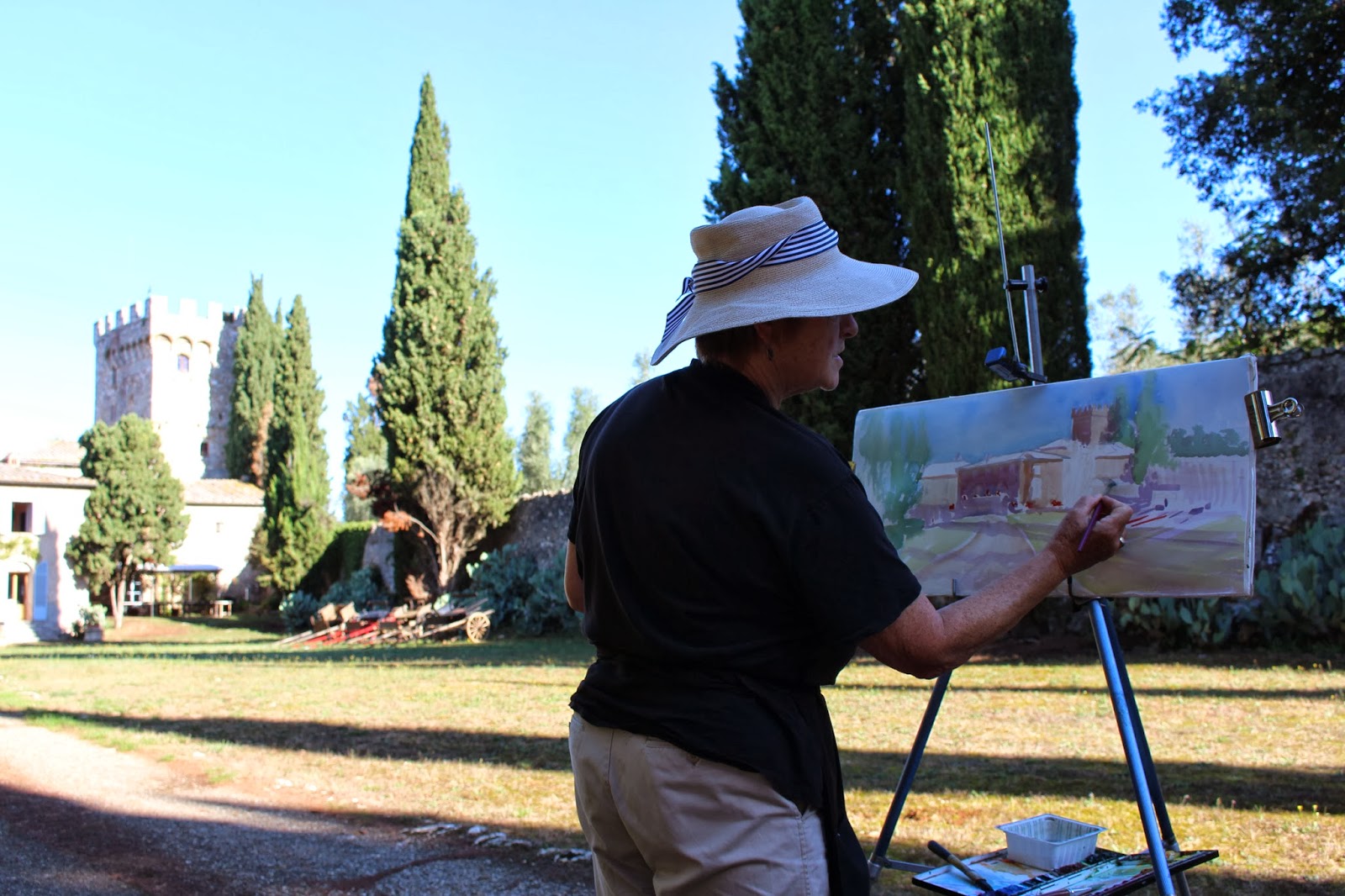 The watercolor workshop ladies wasted no time in finding interesting scenes to paint at Spannocchia. One morning Doris gave us a plein air painting demo, teaching us how to capture the beauty of the castello and its ancient tower on paper. After the demo we all went to work, attempting to produce our own watercolor versions of the castello. Being such a slow worker, I didn't finish my own castello painting, but the other artists in our group completed some lovely little masterpieces that day. 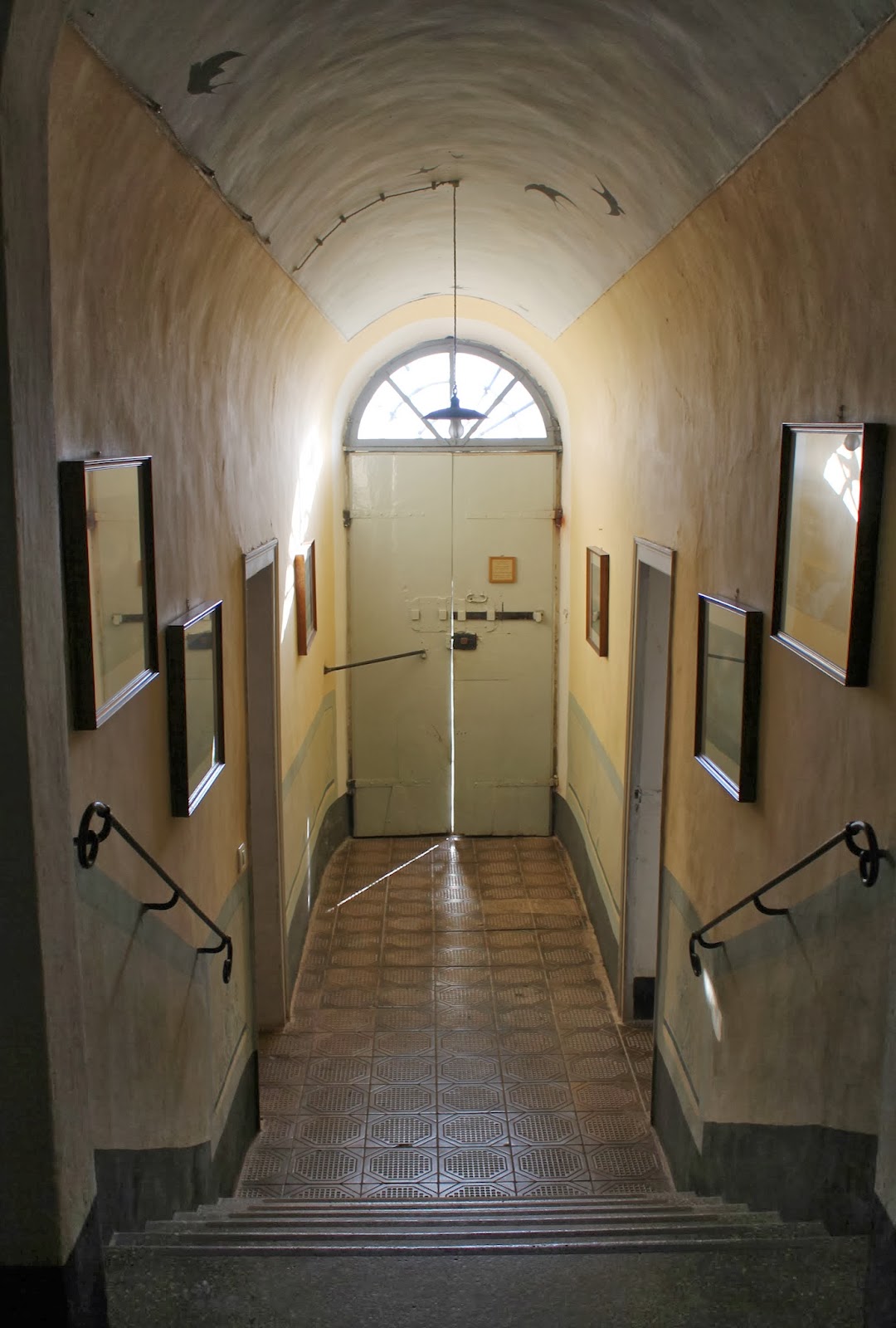 It was difficult to leave Spannocchia. Living in this rambling ancient castello for a week was quite an experience, like stepping back in time. I often got lost in the long hallways of its interconnected buildings. I'd follow the voices I heard echoing in the halls, hoping they'd lead me to the people I was supposed to meet.

Sometimes I felt that at the end of one of those hallways, or in passing through one of Spannocchia's ancient doors...


...I might enter a time warp and
find myself face to face with this guy
WebRep
currentVote
noRating
noWeight
Posted by Helene in Maastricht at 1:13 PM

Helene in Maastricht
I lived in Maastricht in the fall of 2015 while my husband taught at Maastricht University. He also taught here in 2013, and at that time we lived in Sint Pieterstraat (hence the name of my blog!) Our Maastricht address changed, but the view from our new home was still a lovely one. It was great to be back in that wonderful city:-)